It has been confirmed that U.S. household assets increased by the largest amount in 30 years last year. 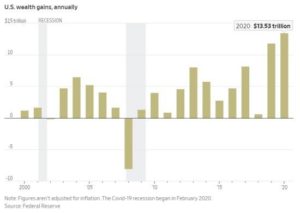 The WSJ explained that the increase in household assets is not surprising, given that the federal government has released an unusually large amount of money to cope with the covid-19 recession. Almost all Americans have reduced credit card debt, increased savings and lowered mortgage rates.

Usually, household assets decrease during the economic downturn. In 2008, when the global financial crisis hit, U.S. household assets fell by $8.7 trillion. However, in the face of the Covid-19 recession, household assets have grown unusually large thanks to the government’s massive fiscal spending.

The Government is Succeed

Thanks to government spending, the stock market enjoyed an unexpected boom. Of the $13 trillion increase in household assets, 44 percent was attributable to a rise in stock prices. The wealth inequality has deepened as the wealthier the stock is.

House prices also generally fall during the economic downturn, but have soared in the face of the Covid-19 recession. The median price of existing homes surpassed $200,000 for the first time in history last year and surpassed $350,000 in May. As housing prices have risen significantly, it has become more difficult for low-income people to own homes.

The housing shortage is deepening. Economists believe that this year, housing prices will only slow down and house prices will continue to rise.

The decrease in low-income jobs is also a factor deepening the wealth imbalance. Office workers saved commuting and food expenses by telecommuting, while low-wage jobs such as restaurant employees and cleaners decreased due to their absence from work.

According to Opportunity Insights of Harvard University, jobs paid more than $60,000 in April this year increased by 2% compared to January last year, while jobs paid less than $27,000 decreased by nearly 24%.